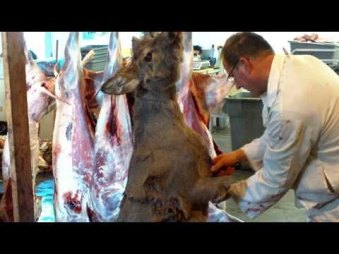 I am very opposed to aging deer. This is not just my opinion, there is science behind it.
Beef is the meat that we were all raised eating, that is commonly aged. And only the young beef raised for steaks are aged (steers and heifers) not the beef that is made into hamburger and sausages. Hamburger animals are usually older animals, most often cows that are past their peak milk producing years. Beef has an enzyme within the marbling of the meat that breaks down in time “aging”, especially when aged for a long time at specific temperatures and humidity. And aging does significantly improve the tenderness of that meat. However, venison does not have those same enzymes in the marbling. In fact, even if venison had that same enzyme, venison has little or no marbling within the meat. There are very few animals that are aged. Pork and poultry are always cut and packaged ASAP. Even when you buy commercially raised deer and elk (which are raised on farms and butchered and inspected in the same way as beef), they are not aged. If aging was beneficial, those animals would certainly be aged because that market sells to restaurants and high-end grocery stores.
The reason I say never age venison “on purpose” is because if venison is properly cooled, it does “tolerate” a fair amount of temperature variation. Venison is a low moisture meat and has a very low moisture fat which tolerates “hanging around” better than most meats. This is very beneficial to us hunters who hunt out west or other far away places where refrigeration is delayed. The key to any meat tasting fresh and not having off flavors is to field dress and cool the animal AS SOON AS POSSIBLE. The usual conditions (in the woods or other less than sanitary settings) which we kill our venison also adds LOTS of bacteria to the meat. That bacteria is a big culprit for “off” flavors in venison. When venison or any meat sits or “ages”, that bacteria grows like crazy.
In summary, In a perfect world, I would shoot my deer, gut it and hang it in a cool place as soon as possible (if it’s warm out, throw a bag of ice in the chest cavity and drape a bag over the hind).Then I would wait about 24-36 hours to cut my deer. The 24-36 hour wait isn’t to age the deer for a day or two, it is to get the initial body heat out of the animal and have rigor mortis set in. Only on specific cases are animals ever cut up “hot” before the body heat leaves. And to explain that whole theory would be a very long explanation. But it pertains to sausages and the binding of meat proteins in sausages.